It is not only die-hard fans who will be aware that the now-legendary film Rocky Horror Picture Show was a flop when first released. Fewer will know that it acquired sufficient cult status to lead to the creation of the 1981 follow up, Shock Treatment, which promptly became a yet bigger flop, and never even made it to the cinemas. Last night it had its world premiere as a stage show, perhaps pursuing a similar resuscitation to its forebear, though this time a full 34 years later. 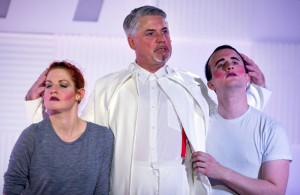 Not quite a sequel to RHPS – there is no Frank N. Furter, no fishnet tights, no gothic eye make-up, only minimal gender-bending and no creepy narrator – Shock Treatment is being billed as an ‘equal’ on the posters. I can’t go that far, but it is safe to say that lovers of the Picture Show, even if they haven’t yet memorised the score, (as the lady to my right had) will love this wonderful production too.

The plot once more features Brad and Janet, the timid hapless couple who, in RHPS seek shelter from the rain and find themselves doing the Time Warp (again) and discovering new things about themselves. 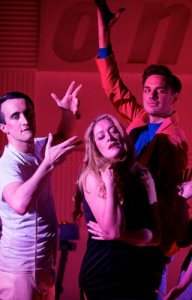 Here though, now married, they’re dragged from the audience as reluctant guests on a TV show (TV meaning television…) and forced to confront their marital difficulties as increasingly sinister characters manipulate them both metaphorically and literally. You see the similarities? Poor Brad (Ben Kerr) spends most of the time unscrupulously drugged, and either offstage or being subjected to the eponymous shock treatment, but Janet (the extraordinary Julie Atherton) develops before our eyes from timid home maker through flirt in a Little Black Dress to fetish nurse in a white vinyl one, a progression which, in the 1970s logic of the O’Brien world is apparently a good thing.

Tim Curry supposedly declined the role of magnate Farley Flavors because he didn’t think his American accent would be convincing. I wish Mark Little had done likewise, because he was the only flaw in an otherwise exquisitely accomplished team.  Mateo Oxley as the slick, camp TV host Ralph Hapschatt would have stolen the show if Atherton hadn’t been so captivating, and Adam Rhys-Davies and Nic Lamont as the creepy English McKinley twins teased and toyed with the audience from beginning to end.

The songs, if you don’t already own the soundtrack, are in the same light-rock, toe-tapping style as RHPS, and though there’s nothing quite like a ‘Time Warp’, ‘Little Black Dress’ and the audacious ‘Look what I did to my Id’ are sing-a-long wonders, as the audience proved.

Get along if you can.