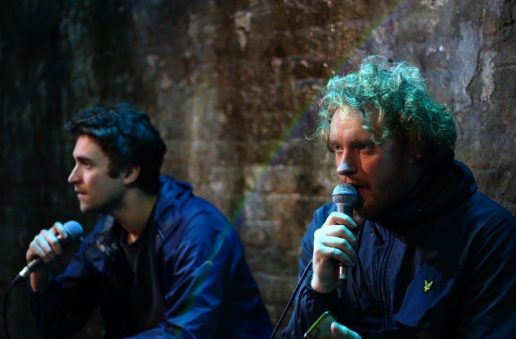 Poleroid Theatre’s This Must Be The Place insists from the outset that it ‘is not a London story.’ Despite taking place underneath the beating and rattling heart of the Capital in Waterloo’s Vaults it certainly delivers on this promise, with the telling of two interweaving but separate tales that fleetingly explore themes which far surpass the concept of place alone. Written by Brad Birch and Kenneth Emson, and directed by Justin Audibert and Josh Roche, This Must Be The Place delves into four individuals and their innermost emotional detachments from not only their physical surroundings but all that is encompassed within them.

Explicitly tapping into 21st century misgivings around the futile connections of modern technology, Birch and Emson immerse the audience into the quests of four amusingly self-depreciating 20-somethings. As the audience take their seats, the actors are already lingering informally on stage, creating the personable feeling that one is among friends and not performers. This sense of amity continues throughout, with comfortable eye contact heightening the intimacy felt between the cold brick walls of Pit 1. The cast, consisting of Feliks Mathur, Hamish Rush, James Cooney and Molly Roberts, deliver the script wonderfully and are convincing in their fragility and grit. However, a noticeable lack of dimension to the female character is almost distracting, in that she appears to serve as an anchor that is tied to home and family values, whilst the male characters move around her with more complexity and nuanced mind-sets. This only contributes to the lack of depth already apparent as the play progresses – scratching at the surface of multiple themes whilst not executing one sufficiently. Mathur and Rush are the stand-out duo, provoking huge laughs and captivating silences – audience putty in their hands.

In spite of its time restraints, the play is engaging and compelling to watch unfold. Transitions between each tale and character are effortlessly fluid, and the script strikes an excellent balance of organic humour and solemn sincerity. Visceral human concepts such as amputation and the loss of parents are juggled against the superficiality of social media, and the repetitive use of CONNECTION – both verbally and through the elastic dynamics between the duos, makes for a compelling examination of human relationships.

The core premise of This Must Be The Place is not centred around place itself, but around the drives in us to run away, and the intricacy around how we define ‘home.’

Although compelling, intimate, funny and an interesting take on contemporary culture, the script is crowded with suggestions and concepts, and therefore any obvious depth and impact is lacking. This, along with the at times non-linear narrative means that you’ll need to do some of your own work in order to grasp any tangible meaning from the play. But maybe that’s the point? Regardless, a perfectly apt venue and talented young ensemble of actors make for a visit much worthwhile.

This Must Be the Place plays at Vault Festival from 8th until 12th February 2017.

Tagged as: Drama, review, Theatre, This Must Be The Place, Vaults Festival