Harry Henderson reviews Peter and the Wolf at Assembly, Edinburgh Peter is visiting his Granddad who lives in the woods and, whereas Granddad fears all the animals that lurk behind the trees, Peter is eager to explore all that nature holds. Goblin Theatre have taken the essence of […]

Harry Henderson reviews A Strange New Space at Summerhall, Edinburgh This simple children’s show touches on complex issues of home, separation and the refugee crisis. Using a cardboard box and the few items inside a rucksack, Tessa Bide tells the story of Amira – a young girl who […]

Amy and Tom Milne review The Snow Queen at Theatre N16 Getting festive at Theatre N16, The Snow Queen is a delightful new take on Hans Christian Anderson. Adapted and directed by Tatty Hennessy with co-direction by Scott Ellis, whether you’re a Frozen fan or not, it is sure to […]

Kids love pirates, right? And dinosaurs? Then how about Pirate Dinosaurs! This delightful children’s theatre production was a hit at the Edinburgh Fringe and is now beginning a national tour. Based on the hugely popular children’s book of the same name, this show’s sure to keep kids (and […] 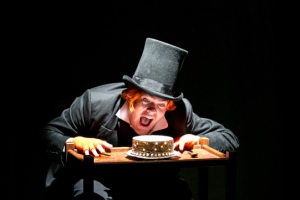 The wilderness has crept into the Chelsea Theatre this Christmas bringing with it a sense of mischievous fun and rebelliousness. Mr Tiger has had enough of city trappings; the repetitive routine and predictable behaviour of his city dwelling friends. What he longs for is the spontaneity of the […]