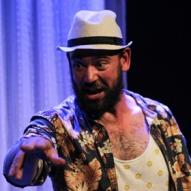 Monologues.  They can fill an audience’s heart with dread, knowing that you are relying on a single actor and minimal props for the best part of an hour.  Actors love them on the other hand.  All eyes on them alone, their job to beguile the audience with their performance and minimal props. Done well, they can work brilliantly – at their best you forget there is a single actor on stage.  Done badly they can feel like you have been cornered by a bar room bore.  Unfortunately The We Plays, two separate pieces written by Andrew Maddock, with different actors and different directors, delivered both experiences on the same evening.
The first play, Cyprus Sunsets, featured John Seaward, as an unnamed character whom we meet in Cyprus in the aftermath of a breakup.  His Hawaiian shirt and Kiss-Me-Quick hat belie his dark mood.  There was not enough light and shade in the performance to engage the audience – essential in a monologue.  There is some clever use of the suitcase as a versatile prop, but lack of empathy with the character is fatal.  It was like being buttonholed and harangued for 45 minutes. 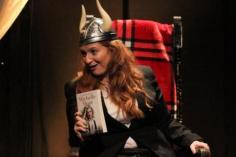 Approaching Irn Pru with trepidation after the interval, this was the antithesis of the first play.  Again there is tragedy in the background, but Jennifer O’Neill, directed by Ashley Winter, delivers a performance as a Scottish working-class heroine which is engaging, witty and poignant.  We care about the character and it never feels like the stage is under-populated.  It is a funny and uplifting story of determination in the face of adversity.
It is hard to recommend the show as a whole, but if you get a chance to catch Irn Pru on her own, do so.
Simon Ward
The We Plays runs at Hope Theatre (Hope & Anchor Pub, Upper Street, Islington) until October 15th